Ness B was finally able to catch up with Jamla/IWWMG recording artist, Rapsody.   We really appreciate the innate skill that Ms. RAP is bringing to the table.  She was a big delightful SURPRISE..a surprise from North Carolina, even better. She is a young lady simply rhyming ..under the tutelage of beat impressario, 9th Wonder. She is just basking in the shine of being an ‘EMCEE”. Not the baddest bitch, or the ho with the most ends, or the biggest ass.  Just a female wordsmith in love with the hip hop game for the “culture and essence” of it all. 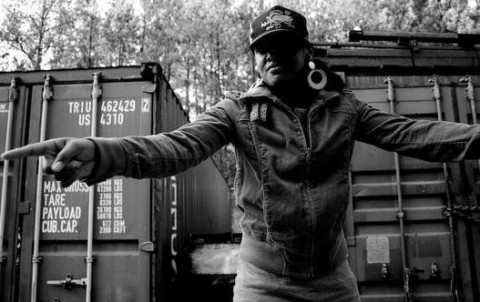 SuperbNess caught up with Rapsody Friday for a quick chat……..

We were not fully prepared for Ms. Marlanna Evans,  although she gave us a taste in 2010 with “Return of the B-Girl”, a tight mixtape  situation that gave us underground classics like “Honda Accord Remix” with Thee Tom Hardy and SkyZoo and “Win” feat. Rah Digga.  This was an impressive offering especially having the wherewithall to release such organic pieces in this age of “ends over substance”, “record sales over content”.

Enter 2011, there is a new epic mixtape, Thank H.E.R Now , it drops June 21st and it is fiyah.    Fortunately for us , there is one sista who is not afraid to keep her Hip Hop authentic. . .. Oh Yeah and the shit’s free. Don’t sleep I would gladly pay the full 21.00 for this here. Guests include : Big K.R.I.T, Estelle, Raekwon the Chef, Marsha Ambrosius, MURS,  Jean Grae, Mac Miller, and Phonte just to name a few..  We support her mixtape  like THAT…Go here and grab it NOW… www.iwwmgroup.com

The Banger Sisters are super excited to RE introduce you to Rapsody, since we did an initial post last month about her,  she is the future (We really hope she is the future) of HIP HOP .. Come on girl ,  let’s turn this shit around…

Working with Raekwon the Chef:

Rae and I did not get to record in the studio at the same time.  A week prior to him actually doing the song he came to North Carolina on his current tour stop. He came to the studio and I met him “You try to stay calm but inside you are like this is Raekwon from Wu Tang”.  9th played him some beats , we asked for Wu Tang stories, and we laughed . I also asked for some advice which he gave while he (Raekwon)  responded approvingly to some of my songs that 9th was playing.  She continues , Raekwon was like “Yo, I like it, I think I am gonna give you a shot”,  and I was like, WHOA!! This is how the  Raekwon collab “Black Diamonds” came to be.  She remembers it as “A Day she will never forget”.

Her lyrics and the beat were sent to Raekwon, he laced the joint, sent them back and the end result is a classic. She is like a schoolgirl when she trips a little about the realization that the Chef is choppin up lyrics on her joint.  “I heard Raekwon say my name and all I could do was hang my head, I was stuck on stupid”  truer words have not been spoken from any emcee professional who is also a fan.

She’s Sparklin…From “Return of the B-girl”

Rapsody has breathtaking breath control.  She is an emcee’s emcee.  The beats she uses are not what female rappers call the dreaded “girl beat”.  This is a beat constructed from parts that the producer has wiped his butt with and they are most often than not “soft in the ass”.   This phenomenon leaves the artist wondering if a joke is being played since “insert famous producer here”, did not give Jay Z or Jadakiss this kind of beat.  Rapsody has nothing to worry about in that department. 9th Wonder has constructed gems worthy of being….  9th Wonder beats, no more no less, his consistency is present, be it for David Banner, Erykah Badu, Lil Brother , or Rapsody, the production for this Album is solid.  When asked about her beat selecting process she stated that she chooses beats that are comprised of  “soulful boom bap that bring out a feeling in me”, they also bring out the dope prose which rides effortlessly over the tight loops and vintage  breakbeat stylings of 9th Wonder. She often prefers to sit in the dark quietly with a beat, perhaps she might get the inkling to handle it right there in the studio.  There are other pieces of music that she may need to take home to sit with for a spell or perhaps she will pace the floors while listening until a rhyme is born, she uses many methods to get to the cadence of each snare or bass loop.  According to Rapsody, the process to get to the writing varies “depending on the day of the week”.  Regardless of method of approach we can clearly see that the end result is hip hop brilliance.  On the production end, 9th Wonder  gives you what you are expecting AWESOMENESS, while Rapsody gives you what you have been looking and waiting for.

Rapsody is as humble as she is great, she is shy when approached with the suggestion that she walks in the paths of Sistas in the realm of Bahamadia, Queen Latifah, Lauryn Hill and Mc Lyte.  “These are my elders in a sense , Rapsody states,  so it’s like Wow!!” I am nowhere near them in my opinion, I have so much respect for them so for me to be compared to them is humbling.   Do I believe I am there yet?  NO! Those artists,  they have track records and have made classic, classic music. I have a long way to go but it feels good to know that I am going in the right direction. She even describes MC Lyte as one of the first female emcees that drew her in and commanded her attention.  I believe that Ms. Georgie Peorgie was potentially one of the catalysts to Ms. R-A-P picking up the MIC.

Like most of us, she cites the early musical influence of Micheal Jackson.  She could find inspiration in his balance and domination throughout several genres of music. She also notes Erykah Badu’s “Mamas Gun” as one of her favorite albums of all time and will be quick to point out that although she enjoys Mos Def, A Tribe Called Quest, and Queen Latifah,  Shawn Corey Carter is number one . Yes Hov won the top spot on Rapsody’s Most Influential Emcee’s list.

Rapsody makes no issue with letting her musical heroes and influences be known, She has always enjoyed working with great producers like 9th Wonder and Dj Premier ( Return of the B-Girl/I’m Ready) however, her producer’s wishlist reads like a list full of  staples like Pharrell, Hi Tek and Pete Rock. She also has her to ear to the “right now” and enjoys the future cats of production , she  enjoys Odd Future’s Frank Ocean while also expressing  an interest in working with Compton’s newcomer Kendrick Lamar who definitely has “next” according to the “buzz” around the industry. Rapsody would also like to work with Andre 3000 or the sangin sistas of ” WeareKing” or “King” as they are affectionately known.. *sidenote* BangerSisters love King .. they opened for Prince closing weekend lol..

What being a B-Girl means to her?:

When you hear the word B-Boy/B-Girl, one immediately thinks of breakdancing and that is one of the elements of hip hop, however I also include the definition in my part to being a real hip hop head.

A real B-Girl has the true, pure love of the art form and the culture and wants to promote and preserve that.

For me it’s Culture first, and now with mainstream and the commercialization of some forms of hip hop, it is not being represented in it’s purest form.  A lot of people don’t understand hip hop because of it’s negative images that are fed to the masses on a daily basis.  I am trying to take it back to the essence and culture of it. We will take hip hop back to it’s purity.  For me it’s never about the money but always about the people in the hip hop community.  That is what being a B-Girl means to me.

It’s not one of her strengths as far as battling per se,  but it is a good tool to come up with concepts for songs and lyrics. I also believe in freestyling for fun and to respect the old school art of it.   She generally uses her shower as her freestyle cipher and develops a lot of songs and metaphors there.

Her actual album will probably not feature a whole slew of guest appearances but there are two artists she needs to be on deck for sure.  One being  Erykah Badu, ” I mean Erykah is Erykah man”, she giggles, and Jay-Z whom she feels is a little bit of a large challenge and quite possibly out of her reach.  These would be the two featured artists she would most likely lobby for being on the next album.

Well we hope you enjoyed this little chit chat with one of our new favorite emcee’s . Did you learn about her childhood animals, her age, or favorite shoe designer No.. BUT you did learn that she is a picky eater, loathes ketchup, mayo, mustard, bacon and seafood (in that order), I mean she said she could go on and on about the things she doesn’t eat lol.. She likes to kick it in the aisles of Barnes and Nobles and she could catch a different flick at the movies everyday.   She is a self proclaimed tomboy and loves sports and video games.   So watch out when you are on XBOX Live, the person you could be battling in Gears of War 3 anonymously, could be Ms. Rapsody. HA..  Game on Rapsody….

Rapsody has her sights on the future but she also will not set her self up for disappointment. 9th once posed the question to her in regards to this being her last effort.   If her career ended and nothing else happened after “Thank H.E.R. Now”, she securely suggests that she would not hang her head low. “I can always look back and say that I did songs with Marsha Ambrosius, Estelle, and Raekwon”.

Right I mean like who gets to say that after a full emcee  career let alone one mixtape.

We here at Bamboobanga don’t think securing JayZ  is too far fetched Rapsody, I mean like is he on “your” level . LOL..good luck and we endorse it.

For more Rapsody information .. Check out 9thwonder.com …  or this other interview where even MORE questions are answered here @ Vibe.com. yeah read all the interviews with her . Hell she is just that awesome LOL..

7 thoughts on “Thank H.E.R Now… The BangerSisters already did…!!!!”