Although we kee kee alot here at Bamboobanga420 , the world’s conditions do not fall short from our view.  It is an absolute travesty what is happening at the horn of Africa.  Somalia suffers , in the last 90 days , there has been a loss of over 29,000 children alone. Unfortunatley more losses are expected.

By all accounts, the famine is the worst humanitarian disaster to strike the region in decades, made all the more dire by Somalia’s isolation and inaccessibility to aid workers. “If this were Haiti, we would have dozens of people on the ground by now,” Eric James, an official with the American Refugee Committee, told the Times. “It is safe to say that many people are going to die as a result of little or no access.”
Slates’ Home

Part of the devastation,  is due to the drought which has spread into areas normally not hit with such dry lands.  This is deeming the crops stagnate , therefore slowing down the food process as well as the trading and farming in the area. One sista states that she lost 3 children on the way to get aid in Mogadishu. NOT ONE but THREE.. all while trying to get food for her babies. This is sad. We Americans waste money at an alarming rate, we worship and create heroes of people who spend excessively and scoff at the survivalist who has to get by.

Warning that thousands of people could die in the absence of immediate humanitarian assistance, the UN Office for the Coordination of Humanitarian Affairs said that 80 percent of the 476,000 malnourished children in Somalia – up from 376,000 at the start of 2011 – live in areas controlled by Al-Shabab 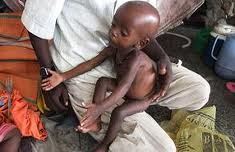 Al-Shabab, the controlling  faction in the area,  is not being as easy to get through to get the aid to the refugees , so you may die by hunger or murder.. I will not complain today about how I am surviving …

Our President has allotted an additional 105 million to go along with the 565 million We, Americans have already donated.. You won’t really hear about that though.. Link to UNICEF below.. and if that’s not your charity of choice.. FIND ONE ..THAT IS REPUTABLE .. AND DO SOMETHING!!!!!