Yes folks, if you follow Tennis you know and already understand the powerhouse that is 19 year old tennis phenom.. Ms. Sloane Stephens... She has been slayin on the clay (or grass for that matter) for a few years,  and let’s face it she is already equipped with the aristocratic moniker a’ la Crystal Carrintgon or Dominique Devereaux . You would surely hope a sister named Sloane would whip some high end ass on the tennis court or croquet field.. LMBAO Okay but seriously she shocked the world with this one, you do realize that Serena Williams has not lost a set in like 20 matches or something.. and the last match she lost was in August.. Sloane came in ranking 40th in the world and caused a historic upset .. Ms. Stephens is not just a fledging new face, she is a force to be dealt with,   She has had a strong steady presence in the tennis community respectively since she was 16 at best.  She is the youngest tennis player ranked with the WTA ; the girl is but a teenager.   I believe her ranking will now rise to 25th after her Australian Open performance.    Tuesday , she defeated one of the baddest sistas to do it ,  Ms. Serena Williams in the quarterfinals of the AUSTRALIAN OPEN… The match started off with the usual Williams domination but come the second set.. things were looking a little gnarly.  Serena even went as far as to destroy her racquet and melt all the way down after the second set. 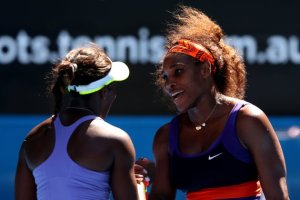 The end result would be the second biggest upset of the week next to Beyonce’  lip -synching The National Anthem..             SLOANE TRIED IT.. 3-6, 7-5, 6-4 and Ms. Williams was officially done for the day! We celebrate Ms. Stephens, although much ado is being made about the fact that Serena was in fact suffering from a back injury coupled with that nagging ankle situation.  She was a wounded warrior out there trying to make it happen , many will say that Stephens basically seized the moment.. she back handed her damaged opponent into submission. Serena Williams would not agree that the injury was the only reason that Stephens won the match, she is honest in stating that “everyone in there is suffering from some type of injury” .   She is not going to let her inability  to perform at one hundred percent take the shine from Sloane’s obvious triumph..   Stephens  is set to battle it out Thursday with the Number One ranking player IN THE WORLD Victoria Azarenka…………………..

Check highlights and Serena racquet wrecking tantrum after the JUMP 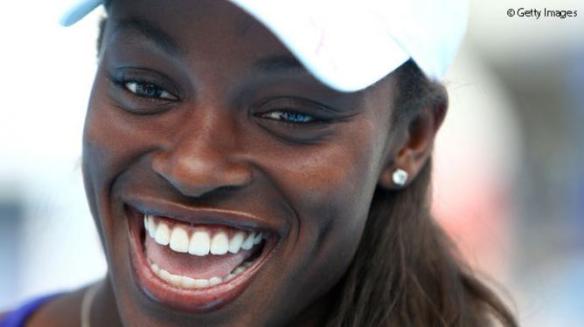 Awww she is so gracious!!! Congrats to both ladies for doing their things!!!!