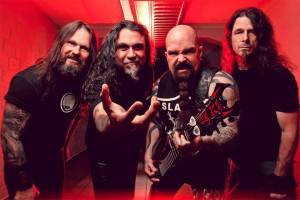 Sooooo …...Slayer’s show 10/28,  at Hollywood’s infamous Palladium sold out quick as fuck..  I know because just like Sabbath.. Nak and I  had been waiting and pounced on pre-sale tickets faster than Kerry King shreds…  I really personally don’t give a damn about those of  you who didn’t make it a PRIORITY to get your fucking tickets ..LOL.. HOWEVER.. the band is more gracious.. THEY HAVE ACTUALLY ADDED an additional date 10/27..to the Palladium stop..  so now your late asses can also be there to mosh yourselves straight into HELL.LOL.. . 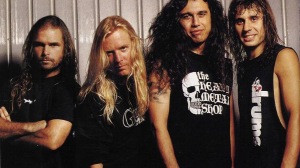 I also appreciate that they added it before the original show.. I made moves son, so I want THE CLOSING SHOW..  LOL.  yeah I know I ain’t shit but you’ll forgive me after you reminisce  and listen to the original Haunting the Chapel version  of Aggressive Perfector… ENJOY.. NOW Go Here  and get whatever tickets are remaining.. . .Keep your horns high, and if you see me .. don’t ask to hit my joint.. OKAY!!!!!!! . RIP JEFF HANNEMAN and fuck SPIDERS!!! 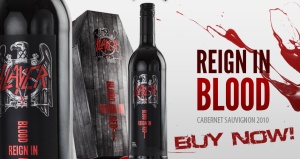 Sidebar: SLAYER HAS WINE YO.. Check it out.. It’s availabe NOW .. in Europe, unfortunately for us in the US.. we will  have to wait until MAY .. BOOOO.. .Well my vino glass will be ready .. My Slayer situation is quite authentic.. i sip my morning coffee from a Slayer cup and rock raggedy ass Slayer vans on the daily.. No I am not a 17 year old white boy.. I am a grown ass .SISTA, mother of one 19 year old skater,  and I kick ass.!!!! YARRRRRRR HAHAHAHAHAHAHAHAHAH

I gotta admit that I wish Jeff was going to be playing with the boys.. but obviously that can’t happen.  Gary Holt of Exodus will be covering in Hanneman’s absence..    It is also unfortunate that we won’t be getting Lombardo..(what is the deal with drummers damn.. No Bill Ward No DAve .. SHIT.. )  I am still totally stoked though because at least it’s  Bostaph AGAIN..  and not some fool we have to get to know.. I havent  seen Slayer since I was like 17 years old.. It’s going to be Epic. See ya at the show..and I won’t be rockin these LOL.. they wouldn’t survive it.. They are already on their last breath as it is.. I take this raggedy bitch’s out from time to time. just so that you muhfuckas know..IT’S REAL…. PEACE!!!! 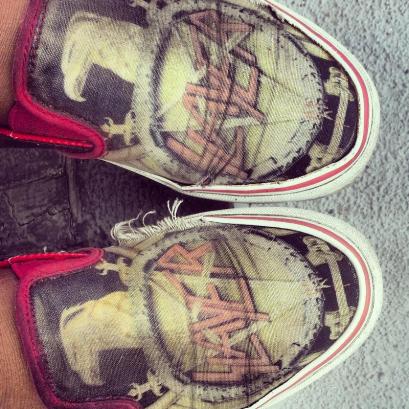