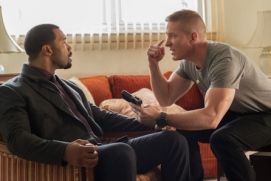 Oh yes!    Curtis “50 Cent” Jackson talks enough shit but thankfully he can back it up . He waged war against urban powerhouse “EMPIRE” and I will be damned if he didn’t set a new standard at his own network;  letting the Empire team knows that Power would not be denied and is still a top contender as a television heavyweight ..The asshole that we hate to love is back along with the rest of the exceptional cast for Season 2 of the gritty street drama , “POWER”.  The record-breaking debut has set a new viewership high bar , knocking original Starz series Spartacus :Vengeance (1.39 million)  out of their dominant spot for an opening season premiere for the network .There has been an 32% increase in viewers since the Season 1 finale in August of 2014 . Power has also experienced a 209% viewership boost from last season’s initial episode and  some are attributing this extra spike in Power fans to residual left over  “Empire” interest.  The success of the Fox Networks ghetto baby has sparked America’s interest in the urban experience, but that is just the word on the street or should I say the marketing round table.   50 is probably not going to agree with that little nugget , I am sure he will accredit the attention to the great writing, action and twisted story of loyalty , betrayal, sex, juggin’ murder  and drama .

I have no idea as i appreciate each show for its individual nuances,  but I do know that Power is an exciting, raw show and we at Bamboobanga have been watching since the first season .  We know the ladies are tuning in for those sexy love scenes with gorgeous brother Omari Hardwick, bring on more chop down scenes please  and thank you ..!!!!! Listen the ladies agree , Ghost is the man with his cheatin ass ….  HE LOOKS GOOD and those love scenes are extra spicy…. Curtis seems to be donning his hats as executive producer and cast member like a champ .  He gets more screen time this season as  “Kanan” ( Jackson) has been released from prison and is now plotting Ghost’s( Hardwick) expedient  demise. 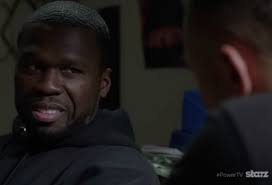 He is trying to wipe our guy off the map with his shit eating grin LOL.. Tasha, Ghost’s main woman and wife ( Naturi Naughton) is still plotting and scheming to keep her man in these streets and Tommy (Joseph Sikora) is still representing as a street soldier demanding Ghost keep his focus on the dope game.   Ghost is still fucking with ( figuratively and literally) the Feds.  He can’t seem to shake Angela ( Lela Loren) who is his old love but also unbeknownst to her and HIM , trying to put her boo thang (Ghost) in prison for life. She works for the D.A. and his case is the one she is trying to crack in the realest of ways. HA! .

.   Of course there is more infidelity , jealousy , thirst, sex and confusion but that is all the stuff that ratings dreams are made of . The supporting cast rocks as well . The soundtrack deserves some serious recognition as Saturday’s debut  ep offered joints by Drake, Pusha T, and Chase and Status.   This thing is loaded with hood goodness but has the slickness of a well produced network drama.  Congrats POWER team, it looks like the second season is starting off successfully …and  .. the riveting series has just been renewed for A THIRD SEASON .  So kudos again ..We look forward to the rest of the season .. . Check below for more of what’s to come in Season 2 of the Starz original POWER. 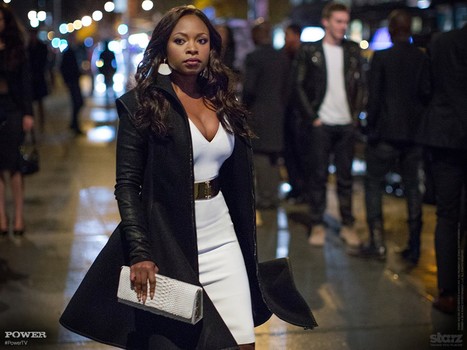