so we are cinephiles here at Bamboobanga …. we are totally obsessed with FILM, Art,Kush and Television ,  respectively .. Superbbness and I both come from film and television backgrounds so we always are watching something AWESOME WHILE SMOKING  SOMETHING…

Growing up ..i was obsessed with being a teen and taking shit over… I mean i was all things emo and angsty .. I am also deep into NOSTALGIA.. right now . i am going to share with you some of my favorite GET HIGH FLICKS.. where the fucking kids were NOT ALRIGHT  …

let’s start with 1979’s Over the Edge.. now if you saw the recent Kurt Cobain documentary “Montage of Heck” .. you would see that Cobain found inspiration in this little flick as well.. It was also one of the first films for Matt Dillon and Vincent Spano.. aww they were babies.. 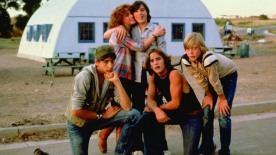 The gist is that essentially this new little desert town , New Grenada . thinks that the local rec center THAT CLOSES AT 6PM.. is enough to provide entertainment and containment for their young people.. The adults basically ignore them until one of the kids gets a hold of a pistol and starts foolin around,  and accidentally (err) shoots and kills a local police officer .. UH OH .. the next night the old folk gather to decide what to do … and during that time .. ALL HELL BREAKS LOSE.. and the kids are in charge like Charles HAHAHAHAH… it’s cheesy and awesome… This movie also has a damn awesome soundtrack ( good luck finding it though)  , Jimi, Cheap Trick , (lots of Cheap Trick) , Van Halen, and The Ramones to name a few..   Director : Johnathan Kaplan …….Starring: Matt Dillon, Vincent Spano , Pamela Ludwig

My next favorite is 1983’s Suburbia .. now i have put this joint on here so many times.. but hell.. that was years ago so HERE IT IS AGAIN LOL.. .. So it starts off .with a teenage runaway chick hitch hiking, she is picked up by a lady with a baby .. the car gets a flat, (this was before cell phones ) .. the lady gets out to use the payphone on the side of the freeway and her baby  is mauled and killed by a rabid stray dog (off camera of course BUT STILL LOL) .. ..  GOT YOUR ATTENTION. yeah that’s how i felt as a preteen LIKE OMG, WHAT THE FUCK , hahaha ..

We then see young Evan with his bitter drunk ass mama going through it .. He goes to see TSOL .. somebody slips him a mickey and he meets up with blonde coiffed punk  Jack who offers him a place to stay … Evan is like fuck it ..”my life is shit anyways” .. and on their way to the raggedy ass squat house.  (T.R House, which is a raggedy squat house in an unincorporated part of land off the 605) .. they  pick up another wayward kid.. Joe Schmo who is salty because his dad is gay … soooo anyways a bunch of shit goes down .. the house is full of young punks, ONE OF THEM a very young FLEA FROM THE CHILI PEPPERS ha he plays a dude with a rat named RAZZLE. AAAH  Flea!!!!!!!!!!

The young squad becomes THE REJECTED.. erego the moniker,T.R.  These kids loot to live, get drunk , and revolt against “THE MAN” ..   yadda yadda .they become the neighborhood menaces .. . it all ends in a culmination of FUCK .. this is one of my favorite flicks… it’s cheesy too .. but as a young PUNK (in my mind).. this told my story hahahahah..   A cautionary tale of Mohawks and rebellion .. most of the actors were not actors but real local punks and i have always thought that was really rad.. never mind that it was not going to be in line for any Academy Awards hahahaha…   Penelope Spheeris of “The Destruction of Western Civilization” documentaries did a cool job with this low budget nugget.. so roll up .. lay back and enjoy.. also get up and dance around when “Washed Away” comes on.. that’s the jam .. AYEEEEEEE  Director and Writer : Penelope Spheeris  Starring: Chris Pederson , Bill Coyne, Jennifer Clay and FLEA ..

So this little gem is probably the most POPULAR .. amongst  you reading this..I mean  who doesn’t say “Stay Gold” ..or “Let’s Do it for Johnny” .. on the regular hahahah ..Now this group of teens were not neccessarily trying to TAKE OVER per se’ but they still struggled with every young person’s relatable need tosurvive,  fit in and rule in their region.. . I remember crying when Karate Kid ( Johnny Cade played eloquently by the forever young Ralph Macchio)  died .. HE WAS JUST TRYIN TO SAVE THE BABIES YA’LL…….( tears) ….

There is not really a huge breakdown for this classic as the story is quite cut and dry ..  .. S.E. Hinton’s novel inspired this celluloid treasure , it is the age old battle between the Have’s and the Have nots ensues.. with much carnage and fervor…. as a young-un i am sure i had a crush on the ENTIRE gorgeous cast LOL… Basically a rumble between the poor Greasers and the ballin Socs ends with a death and then it’s really ON.. This is one of my faves and the cast is BANANAS ..Director: Francis Ford Coppola Starring: Tom Cruise, Diane Lane, Ralph Macchio, Patrick Swayze ,Emilio Estevez, Leif Garrett, C.Thomas Howell  *fun fact: author of novel S.E. Hinton is featured as a nurse in the hospital where Johnny dies*)

Here is another classic that we have featured here on Bamboobanga BEFORE, (in case you missed our last Rumblefish piece.. here ya go )  but no worries, allow me to REITERATE the greatness of this joint here.  Rumblefish was boasts almost the same cast as The Outsiders and is inspired by and based on Hinton’s novel “Rumblefish” . The screenplay was written on the weekends when Coppola and Hinton weren’t filming The Outsiders, talking about WORK ETHIC …MAN.. ANYWAY .. this movie is literally a cornucopia of young eighties actors on the come up .. Matt Dillon is a long way from Shady Pines as young teenage hard head, Rusty James; he and his crew roam the HARD streets of Oklahoma City looking for some trouble and gang activity .. if he is not with his squad , ( Laurence Fishburne, Nicolas Cage,Christopher Penn , and Vincent Spano AGAIN.. ) then he is boo’d up with his lovely girlfriend .. Patty (Diane Lane) .

Rusty’s mom bounced awhile back and left him and his brother Motorcycle Boy (Mickey Roarke)  with their drunk, welfare recipient dad ( Dennis Hopper) . Motorcycle Boy has just turned 21 and is the local OG in the neighborhood , MB leaves the city and in his absence Rusty tries to follow in his footsteps ,wreaking havoc and rumbling in the streets until his older brother returns and tells him to straighten up.  Rusty and his crew will have none of that ; it is still all about the turn up for them as they participate in extreme teenage mischief and illicit behavior  that will undoubtedly lead to their young demise . Motorcycle Boy appears to everyone to be losing his mind when in fact he just wants to keep it cool and just get to the shoreline LOL.( no really he has an obsession with seeing the water). This is not only great film, but the soundtrack is awesome too. Stewart Copeland ( Police) used experimental methods to score the film, getting assistance from Wall of Voodoo’s Stan Ridgway  for the popular title track “Don’t Box Me In”. Copeland also used the new (at the time) composing and tempo software,  Musync, an editing program allowing him to mix ambient sound from Tulsa’s streets within the actual soundtrack of the film.

Rumblefish is a poignant coming of age piece that allows for us to see the struggle between becoming a man and trying to find one’s place in an uninspiring environment . Two brothers are on opposite paths , yet both seem to lead to the inevitable destruction of the very fabric of who they are and who they are TRYING TO BECOME . (*Author S. E. Hinton makes a quick appearance as a local prostitute in this one*)

Dammit I used to simply love this movie .. and i also loved Stan Ridgeway…(Wall of Voodoo), let’s pause in observance of Francis Ford Coppola’s “RUMBLEFISH”…

i mean damn… It’s a classic if you don’t know now you knowww NIGGA!!!!!

The soundtrack was amazing…. Don’t Box Me In was a classic!!!!

ALMOST THE SAME CAST AS “The Outsiders”

Here is my Ode to Rusty James and them…