Hey guys, SuperbbNess here coming to you live from the NorthWest.     I am hollering at you straight from the  Puget Sound  baby..Ayeeeee!!!     Yes I recently moved to Seattle, WA and it’s awesome.. Bee told ya that things were changing around here and boy HAVE THEY !!!  Keep it here so you can learn about the happenings in and around the Seattle region, learn about new strains, local dispensaries, the new weed climate, and all types of local awesome activities .  I also got  you on all the  regular goings ons in the world at large.that I usually cover and share.. 420bamboobanga.com..  YOU  know how we do!!!!  I documented the actual trek me and family took from LA to WA… It’s exciting , so be looking  forward to sharing that crazy experience with me in a few days.. NOW… that the pleasantries have been exchanged LOL..

Allow me to congratulate ya girl Serena Williams on her 17th YES.. 17th Grand Slam and 5th Us Open title.. .. I MEAN DAMN.. Serena is a CHAMPION..  The Williams Sisters  together  are a major situation  , having  earned 22 Doubles Titles and a host of sports accolades both together and individually.   They both will serve you on ALL SURFACES (grass, clay, hot coals) …  .. OK..

Serena dominated Victoria Azarenka 7-5, 6-7, 6-1, in the US Open Final this past Sunday.  She is well on her way to becoming the highest ranking female tennis player in the world OF ALL TIME.. She is already No 1 in WTA Rankings.  Martina Navratilova has cited that “Serena should be ranked in the top 5 of all time , Navratilova also stated that , “It’s not just about how many slams you win or how many tournaments you win – it’s just your game overall. And she’s definitely got all the goods.”  Well we agree.. YOU GOT THE GOODS GIRL.. This is awesome since she has just come back from a series of surgeries after 2010’s accident with a piece of glass in Munich .  This injury kept her out of the game for over a year and she came back like WHAT!!    420Bamboobanga would like to congratulate you Serena. Keep on sis. !!!! 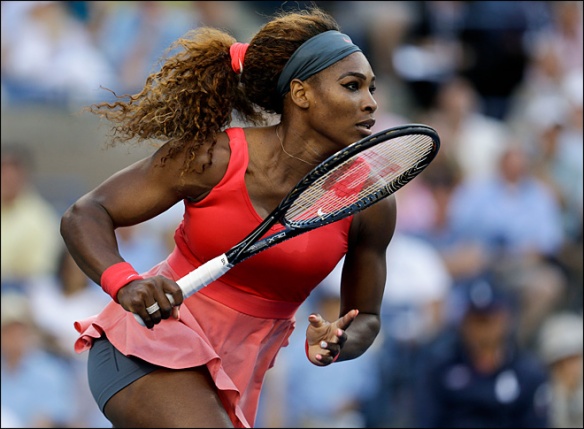 “When you’re always trying to write history, or join history in my case, maybe you just get a little more nervous than you should,” she said later. “But I think that’s kinda cool because it means a lot. It means a lot to me, this trophy. It makes me feel I’m still fighting to be part of this fabulous sport.” …….. Serena Jameka Williams 2013

Yes folks, if you follow Tennis you know and already understand the powerhouse that is 19 year old tennis phenom.. Ms. Sloane Stephens... She has been slayin on the clay (or grass for that matter) for a few years,  and let’s face it she is already equipped with the aristocratic moniker a’ la Crystal Carrintgon or Dominique Devereaux . You would surely hope a sister named Sloane would whip some high end ass on the tennis court or croquet field.. LMBAO Okay but seriously she shocked the world with this one, you do realize that Serena Williams has not lost a set in like 20 matches or something.. and the last match she lost was in August.. Sloane came in ranking 40th in the world and caused a historic upset .. Ms. Stephens is not just a fledging new face, she is a force to be dealt with,   She has had a strong steady presence in the tennis community respectively since she was 16 at best.  She is the youngest tennis player ranked with the WTA ; the girl is but a teenager.   I believe her ranking will now rise to 25th after her Australian Open performance.    Tuesday , she defeated one of the baddest sistas to do it ,  Ms. Serena Williams in the quarterfinals of the AUSTRALIAN OPEN… The match started off with the usual Williams domination but come the second set.. things were looking a little gnarly.  Serena even went as far as to destroy her racquet and melt all the way down after the second set.

The end result would be the second biggest upset of the week next to Beyonce’  lip -synching The National Anthem..             SLOANE TRIED IT.. 3-6, 7-5, 6-4 and Ms. Williams was officially done for the day! We celebrate Ms. Stephens, although much ado is being made about the fact that Serena was in fact suffering from a back injury coupled with that nagging ankle situation.  She was a wounded warrior out there trying to make it happen , many will say that Stephens basically seized the moment.. she back handed her damaged opponent into submission. Serena Williams would not agree that the injury was the only reason that Stephens won the match, she is honest in stating that “everyone in there is suffering from some type of injury” .   She is not going to let her inability  to perform at one hundred percent take the shine from Sloane’s obvious triumph..   Stephens  is set to battle it out Thursday with the Number One ranking player IN THE WORLD Victoria Azarenka………………….. 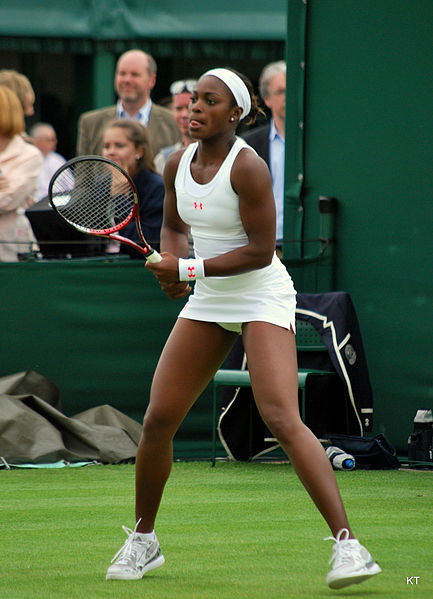 Let us put our hands together and give a STRONG round of applause for the Williams Sisters and their efforts at last weeks Wimbledon Situation.. ..yess they got stretched out on the same day .. this is the first time since 2008 that the sisters have lost together, on the same day, since The French Open of 1998.   Both of these sistas are coming back from illnesses and surgeries so this stat is still good …….

They both didn’t make it past Round 16 but that’s alright.. We support you ladies anyway..

U BITCHES WATCH OUT THE MOJO WILL BE BACK..  (FOR A BLOW BY BLOW take it HERE...)

Hey every bitch can get a little rusty.. BRAVA LADIES.. WEST COAST STAND UP 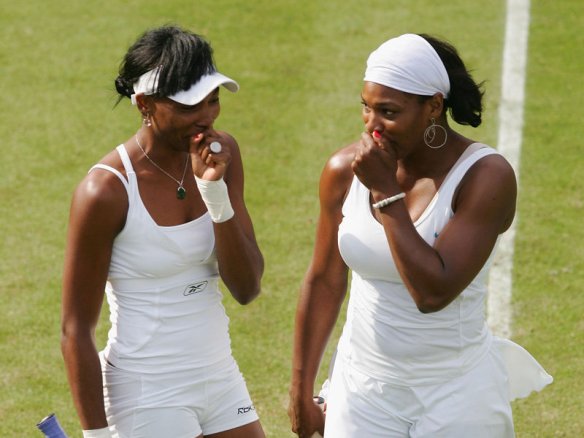